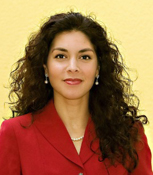 Judge Tabaddor was appointed as an Immigration Judge in November of 2005 by the US Attorney General. Prior to her appointment, she served as an Assistant U.S. Attorney for the Central District of California in Los Angeles. She has also served as a trial attorney with the Justice Department’s Civil Division in Washington D.C, and as a law clerk and attorney advisor for the Immigration Court and the Chief Immigration Judge. She received her Bachelor of Arts degree (with honors) in 1994 from the University of California, Los Angeles, and her Juris Doctorate in 1997 from the University of California, Hastings College of the Law.

In addition to her duties as a judge, Judge Tabaddor is an adjunct professor with the UCLA School of Law where she teaches an advanced seminar course on Immigration Law and Crimes. She has served as an adjunct professor at a number of other law schools, including USC, George Washington, & Chapman Law Schools.