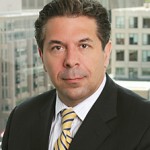 Robert Babayi, a Co-Founder of IABA and a partner at the Washington, D.C., office of Venable, LLP, an AM Law 100 general practice firms with attorneys practicing in corporate and business law, complex litigation, intellectual property and regulatory and government affairs, among others

Registered as an attorney before the US Patent and Trademark Office since 1989, Robert Babayi has prepared and prosecuted several hundred U.S. and foreign patents with emphasis on wired and wireless telecommunications, computing architecture, manufacturing processes and inventions related to the Internet and e-commerce. He has been involved in defensive and offensive aspects of complex patent litigations before the ITC and at the District Court level.

Robert Babayi previously served as in-house counsel at Motorola, Inc., and IBM Corp.  Currently, Robert Babayi serves as outside general counsel to a number of firm clients advising them on transactional and dispute resolution while managing their litigation needs.   Robert Babayi is admitted into the D.C. and Florida bars.