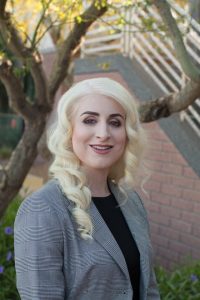 Afsanieh Rassti was born in Dallas, Texas but raised in Fountain Hills, Arizona.

Afsanieh is a longstanding Arizona State University Sun Devil, having received her Bachelor Degree, double majoring in Political Science and Justice Studies, in 2010.  She also earned her Master’s Degree in Global Technology and International Development from ASU in 2012. Thereafter, she attended Sandra Day O’Connor College of Law at ASU graduating in 2016. As a student, she served on the executive council of the Pro Bono Board and helped create a Law Society of Human Rights dedicated to creating opportunities for law students to embark on human rights missions abroad.

After law school, Afsanieh focused on global immigration issues as a consultant focusing on family and employment-based visas for Iranian families. As a dual citizen of the United States and Iran, this was a fulfilling endeavor before she began her career as an estate planner in 2017. She joined Berk Law Group, P.C. in February 2020.  Her practice areas include probate, trust, and estate disputes, elder abuse and exploitation, guardianships and conservatorships, and estate administration.

Afsanieh is currently admitted to the State Bar of Arizona and the U.S. District Court (Arizona). She currently serves on the Executive Board of the Maricopa County Bar Association Young Lawyers Division and is the Arizona National Board Representative for the Iranian American Bar Association. She is also fluent in Farsi/Persian.

In her free time, Afsanieh enjoys spending time with her family and friends, traveling the world, football and experiencing new cultures and food.