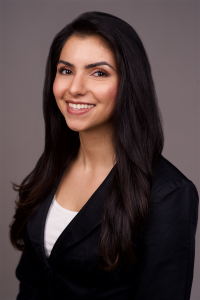 Mitra Yazdi is an associate at White & Case, LLP in New York City, working in the Energy, Infrastructure, Project and Asset Finance division. She received her J.D. from Columbia Law School in 2020 as a Harlan Fiske Stone Scholar, along with a Parker School Certificate for studies in International and Comparative Law. While at law school, she served as president for both the Middle Eastern Law Students Association as well as the Columbia Society for International Law. In addition, she was Editor-in-Chief of the Columbia Journal of European Law and worked briefly at the US Court of International Trade. She has since focused on the implications of social media and technology law in a globalized economy and in particular on concepts of cyber governance and cyber warfare, with forthcoming publications in this area. Prior to attending law school she worked at a quantitative trading firm specializing in exchange traded funds, working across American, European, and Asian markets. She completed her undergraduate education at Yale University, where she received a B.A. in Ethics, Politics & Economics in 2015. Ms. Yazdi is highly involved in the Iranian-American community, and currently also serves on the NY Planning Committee for the Iranian-American Women’s Foundation, as well as the NY legal committee of the National Iranian-American Council. She is also a member of the Public Affairs Alliance of Iranian-Americans, and in 2013 received the organization’s Capitol Hill Internship Program Fellowship.