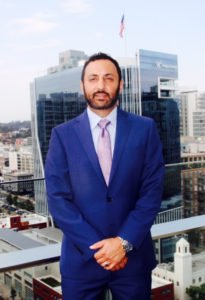 The Iranian-American Bar Association, San Diego Chapter, is pleased to announce Arshan Amiri, Esq., as its Member of the Month for April 2017.

A pillar of the San Diego legal community, Arshan has made a career out of navigating the complexities of securities law, mergers and acquisitions, and corporate governance. A 2006 graduate of the University of San Diego School of Law, Arshan began his career at renowned firm Robbins Arroyo LLP, where he litigated commercial and securities actions nationwide in both state and federal court.

In order to better serve the community’s needs and match the city’s growth in the bio-tech, life sciences, and technology industries, Arshan went on the start his own practice, the Amiri Law Firm, P.C., in 2013, where he focuses on entity formation, corporate governance, angel and venture capital debt and equity financing, technology transactions, and mergers and acquisitions.

A former board member of IABA-San Diego for several years, Arshan credits the association with supporting his ambitions both before and after starting his own practice. Indeed, Arshan notes, “When I was starting out as an attorney, joining IABA helped me meet and exchange ideas and experiences with many peer Iranian attorneys in the San Diego community, and when I had just started my own practice, I received an incredible referral from an IABA member that has since provided a consistent client base.”

A tireless networker, Arshan found that IABA could cultivate both his personal and professional goals by providing him with regular networking opportunities. In fact, Arshan views constant communication and interaction with one’s peers as the linchpin to a successful career in the legal industry: “Networking is one of the most important components of advancing both professionally and personally, and IABA offers plenty of networking opportunities for its members. It sounds cliché, but networking is absolutely vital and you can never start early enough.”

Having been one of the early members of the IABA-San Diego Chapter, Arshan portends great things for the organization’s future, “I think IABA has a great mission overall and, as membership continues to grow, we’ll see IABA have even more involvement and influence in both the Iranian community and the San Diego legal community as a whole.”

Please take a moment to congratulate Arshan on his honor as Member of the Month for April 2017, as we encourage you to reach out to him for practical advice on not only mapping out your desired career path, but putting a plan in place on how to live it.

Past Member of the Months

Member of the Month Nominations

Every month IABA San Diego will recognize one of its members for his/her commitment to IABA San Diego and/or the Iranian-American community. The selected member’s biographical information will be highlighted on IABA SD’s website and in its monthly newsletter. If you would like to nominate an IABA SD member to become member of the month, please contact us at sandiego@iaba.us