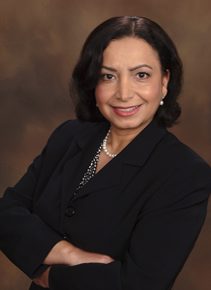 The Iranian American Bar Association – San Diego Chapter is excited to announce Affi Eghbaldari, Esq., as its Member of the Month for May 2017. Affi currently serves as counsel in the Enforcement Division of the California Department of Business Oversight, a position she has admirably held since 2007.  Forever committed to the local San Diego community, Affi safeguards consumers against fraud and unfair business practices.  Affi is a local graduate of Thomas Jefferson School of Law, and received her undergraduate degree from the University of North Texas.

One of IABA’s most devoted members and ardent supporters, Affi has served on IABA – San Diego’s board of directors since 2015, and currently acts as its liaison to IABA’s national board.  While many new attorneys focus on how involvement in a professional association can engender future business opportunities, Affi has taken to heart the human side of networking events, having developed lasting friendships both in and out of the courtroom. Notably, Affi states, “Membership and participation in IABA activities have opened wonderful opportunities for networking with fellow IABA members from all areas of practice. I have met attorneys, judges and law students and have built long-term friendships, resources and referrals.”

Strong-willed and solemn, Affi encourages the Iranian legal community to coalesce around one another, particularly in today’s political climate.  Affi took an active role in encouraging IABA to take action both professionally and socially, remarking during her efforts “I was particularly impressed by how IABA members and other Iranian-American associations united to stand against the discriminatory travel ban.”

As for guidance Affi can provide to the next generation of young, hungry Iranian-American attorneys, Affi advises, “Guard your reputation.  The legal community is small and the wrong step could form a lifetime of professional discomfort. Find a mentor and cultivate that relationship. Get active and involved.”

Should you have the pleasure of meeting Affi at the next IABA meeting or mixer, pick her brain, as her level of commitment to her community and to the well-being of all local Iranian-Americans will surely strike a chord in your own professional and personal drive to achieve success and notoriety in the legal industry.

Past Member of the Months

Member of the Month Nominations

Every month IABA San Diego will recognize one of its members for his/her commitment to IABA San Diego and/or the Iranian-American community. The selected member’s biographical information will be highlighted on IABA SD’s website and in its monthly newsletter. If you would like to nominate an IABA SD member to become member of the month, please contact us at sandiego@iaba.us