IABA Board of Advisor

Dr. Houri Khalilian, a Co-Founder of IABA, is a patent attorney admitted to practice before the State and Federal Courts in Maryland and Washington, D.C., Maryland Court of Appeals, District of Columbia Court of Appeals, the Federal Circuit Court of Appeals and the United States Patent and Trademark Office. Dr. Khalilian [has] started practice of law in 1994 and has been trained at top twenty U.S. intellectual property and general practice law firms in Washington, D.C. Dr. Khalilian’s practice includes preparation, prosecution and procurement of patents; providing counsel to biopharma and other technology clients toward resolution of intellectual property-related issues, including the planning, development and maintenance of patent portfolios; due diligence investigations in connection with mergers and acquisitions; and preparation of patentability, validity, infringement and freedom to operate opinions.

Dr. Khalilian is also involved with the EB-5 Immigration Investment Program and the corporate governance of Regional Centers in compliance with USCIS laws and regulations at the administrative agencies controlling specific businesses proposed by the Regional Centers.

Before entering the field of law, Dr. Khalilian held a research scientist position at Yale University in the Department of Internal medicine. Dr. Khalilian obtained her Ph.D. from the University of Sussex in England in the field of Cell and Molecular Biology. She has more than twenty two scientific and legal publications in peer reviewed journals and book chapters internationally.

Apart from being a Co-Founder and serving as an Advisory Board Member for IABA, Dr. Khalilian has also been involved with other non-for profit organizations prompting the legal and society interests of women and minorities in the USA. For example, she is a Chapter Leader of Public Affair Administration of Iranian Americans (PAAIA), and is an active member (speaker, moderator, and fund raiser) of the Iranian-American Woman (IAW) Foundation.

Sara Mahdavi is a Staff Attorney at the U.S. Court of Appeals for the Ninth Circuit. She focuses on immigration cases, analyzing agency records, parties’ briefs, and motions filed on appeal; drafting dispositions; and appearing monthly before a three-judge panel to advise judges on recommended dispositions. She also selects and mentors law student externs.

In addition, Sara serves on the Board of Directors of the Asian Women’s Shelter, a San Francisco-based organization that seeks to eliminate domestic violence by promoting the social, economic, and political self-determination of women. AWS serves women, children, and transgender survivors of domestic violence and human trafficking, especially those who are immigrants and refugees.

Prior to joining the Ninth Circuit, Sara was an associate at Morrison & Foerster. Her practice centered on employment litigation and intellectual property disputes. She also maintained an active pro bono practice, particularly in the areas of education equity and immigration. She successfully represented a client who ultimately was granted asylum in a gang-based claim; investigated education complaints in the San Francisco Unified School District; and has spoken on the topic of education equity.

Sara graduated from UCLA School of Law, where she was selected to the Program in Public Interest Law and Policy, completed a concentration in Critical Race Studies, served as an editor of the Journal of Islamic and Near Eastern Law, and coordinated the law school’s asylum clinic. Sara was honored to receive one of the first two IABA law student scholarships and admires IABA’s work to educate and promote the interests of the Iranian American community. 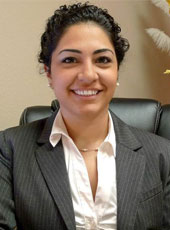