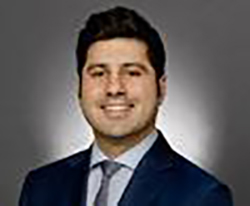 Ali’s hobbies include aspiring to be an amateur sushi chef, admiring art, and, of course, soccer!