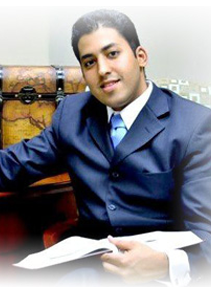 Sean Chalaki is a practicing attorney in Texas. His law firms concentrate in the areas of Corporate, Litigation, Personal Injury, Consumer Rights, and Real Estate Law.

Mr. Chalaki started his career as an IT consultant after finishing his B.S. in Management Information System.  His focus of practice was Internal Audit and Business Reorganization.  He worked on such projects as Facility Event Management for Microsoft, Compass bank (Midsize Business) and other projects for similar Fortune 500 companies.  His own private group focused on Smart Home Technology and One Point Access.

After his B.S. Mr. Chalaki pursued his Masters in Accounting and Information Management.   Mid career he decided to pursue his law career and received his JD from Appalachian School of Law.  During this time period, he also did a Judicial Internship for United States District Court, Northern District of Texas and a visiting status at Santa Clara Law School.

After graduating from law school Mr. Chalaki worked at Modjarrad and Abussad Law Firm.  From there he pursued his career by opening up his solo practice, Law Office of Sean Chalaki & Associates P.C.    Mr. Chalaki grew his area of practices by opening his litigation firm, Chalaki and Khirallah Law Group P.L.L.C in 2013, simultaneously fighting the good fight against the insurance companies, protecting consumer rights and handling commercial litigation cases.

Besides his legal career Mr. Chalaki is the CEO of a software company called Sabzteck Inc. which focuses primary on business automation.  In addition, he is on the Board for Greater Dallas Iranian American Chamber of Commerce and member of Texas Trial Lawyers Association.