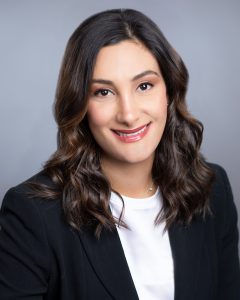 Prior to joining the Commission, she worked as a staff attorney at City University of New York’s Citizenship Now City Council Project where she counseled individuals on immigrated law and participated in completion and review of immigration applications and petitions. Prior to that, she served as an International Law Fellow at the American Society of International Law in Washington D.C.

Saiena graduated from Loyola University Chicago with a B.A. in Political Science and International Studies. She graduated from UIC John Marshall Law School with her Juris Doctor. During law school, she worked for the United Nations Secretariat, Honorable Judge Pamela McLean Meyerson, and Cook County Public Defender. Saiena was an active member of moot court and trial advocacy teams in law school. She also served as the president of International Law Society and student director on the IABA National Board.